Lake Monsters and Monarchs to meet in ICBL Championship Series

Towers Field on the campus of the University of Rochester will be the setting when the Lake Monsters and Monarchs meet to decide the champion of the Interstate Collegiate Baseball League. The best-of-three series opens Wednesday with a 5:30 PM first pitch scheduled. Game two will follow Wednesday night with game three (if necessary) scheduled for Thursday.

Ewell struck out 37 in 33.1 innings of work during the regular season. Opposing batters hit .220 against the right-hander. Throwing a personal best five innings, Ewell notched  the win in an 11-4 victory over the Flyin’ Fish on July 18th. He notched his first win of the season on June 25th when he allowed one run on three hits over 4.1 innings in a 10-2 victory over the Monarchs. In his most recent appearance against the Monarchs, he could not get an out in an 8-3 win.

Over 31.1 innings, Wren has fanned 28 while walking just 16 batters. The right-hander took a no-decision in his final appearance of the regular season on July 19th when he allowed four runs (three earned) on two hits over 5.1 innings against the Flyin’ Fish. He hurled a season-high six innings on June 24th in a 5-2 win over the Snow Dogs. Wren is 0-2 against the Lake Monsters. He struck out six but allowed three runs on four hits over four innings in a 7-5 loss to the Lake Monsters on June 28th. 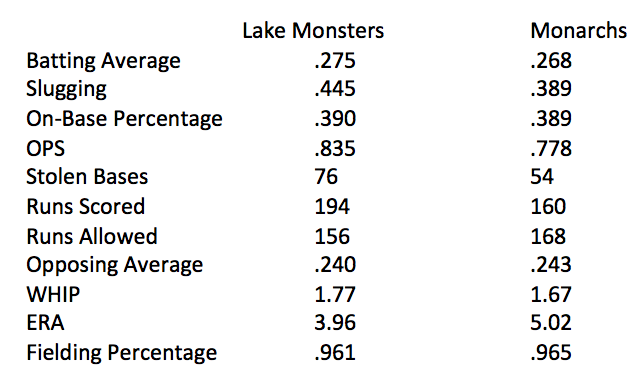 Top Hitters
The ICBL Championship Series pits the league’s batting average leaders with the Lake Monsters Jonathan Catapano (Grand Valley State/Monroe CC)  and the Monarchs Stephen Kemp(Medaille College) finishing the season at .362. Both had 25 hits in 69 at bats. Catapano compiled 12 extra-base hits, 15 walks and a league-leading on-base percentage of .494. Kemp collected four extra-base hits with 14 walks and an OBP of .476. Kemp, though, struck out six times to Catapano’s 15.